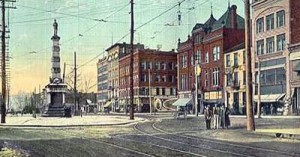 Lawrence County was created on March 20, 1849, from parts of Beaver and Mercer Counties and named for Perry’s Flagship, Lawrence, which had been named for Captain James Lawrence, a naval hero. New Castle, the county seat, was laid out in 1802, incorporated as a borough on March 25, 1825, and chartered as a city on February 25, 1869. It is not certain whether it was named for Newcastle, England, or New Castle, Delaware.

The heritage of the area also produced the theme of Fireworks Capital of America. At one time there were more fireworks manufactured in Lawrence County than in any other part of the United States. Two of the largest fireworks display companies in America are still located in the community.

In 1798, John Carlysle Stewart, a civil engineer, traveled to western Pennsylvania to resurvey the “donation lands” granted by the government to revolutionary war veterans. In the course of performing his task, he discovered that the original survey forgot to stake out 50 acres at the confluence of the Shenango River and Neshannock Creek. Stewart claimed it for himself. There and then was the beginning of the City of New Castle, Pennsylvania.

Stewart laid out the town of New Castle in April of 1798. It was comprised of approximately 50 acres in what was then part of Allegheny County. New Castle became a borough in 1825, having a population of about 300. The city later became a part of Mercer County. On April 5, 1849 the Governor of the Commonwealth of Pennsylvania signed an act creating Lawrence County. New Castle became a city in 1869 and was headed by its first Mayor, Thomas B. Morgan. At that time, the population had increased to about 6,000.

Business in New Castle began to flourish in the early 1800’s with the construction of the canal system which made its way through the city. Numerous manufacturing plants located in New Castle because of the availability of transportation facilities and ready access to raw material markets. The canal system was later supplemented and then replaced by the railroad system which offered greater speed and capacity for freight as well as year round service.

By the turn of the century, New Castle was one of the fastest growing cities in the country as it became the tin plate capital of the world. The tin plate industry marked a turn in the prosperity of New Castle. New Castle’s population swelled from 11,600 in 1890 to 28,339 in 1900, to 38,280 in 1910, as immigrants flocked to the city to work in the mills. In the 1920’s, New Castle enjoyed its greatest prosperity. The landscape of the city was transformed with the building of many beautiful structures, some of which still stand such as The Scottish Rite Cathedral, St. Mary’s Church, and the Castleton Hotel. The city also established its identity. New Castle is known both as the “hot dog capital of the world” and the “fireworks capital of America.” Its chili dogs are the product of Greek immigrants who came to New Castle in the early 1900’s and established restaurants along with their homes. The notoriety for fireworks is credited to two local fireworks companies of international stature, S.Vitale Pyrotechnic Industries, Inc. (Pyrotecnico) and Zambelli Internationale.

In the 1930′ the city, along with most of America, suffered tremendously during the Great Depression. As many businesses closed, members of the community lost their jobs and homes. During this trying time, the federal government established the Works Project Program (WPA) and the Civilian Conservation Corps (CCC). These programs offered jobs to many displaced workers. Many of the stone walls built by the WPA and the CCC still stand as a reminder of the historic demise of our economy.

During World Wars I and II, and the Korean War, industry enjoyed a temporary reprieve. In 1950, the population peaked at 48,834 and rapidly dwindled with the fall of the industrial age to 28,334 by 1990. The present population is about the same. New Castle is the County Seat of Lawrence County which has a population of approximately 100,000. In 1998, the City of New Castle was a host city for the History Channel Great Race. Over 15,000 spectators gathered downtown for the festivities. The city also proudly celebrated its 200th birthday in 1998 with a downtown fireworks festival that attracted over 30,000 people.

Over the past 40 years, New Castle has been transformed from its primary reliance on industry to a well balanced economic base comprised of manufacturing, retail and service related business establishments. Many buildings and old stately homes are being restored by developers and families.

The Lawrence County Historical Society, chartered in 1938, has for its purpose to preserve the history of Lawrence County and to educate the public. The historical society is located in the elegant 19 room Joseph A. Clavelli mansion which overlooks the City of New Castle. Several exhibits are displayed for public view in the mansion.

Home » About » History of Lawrence County