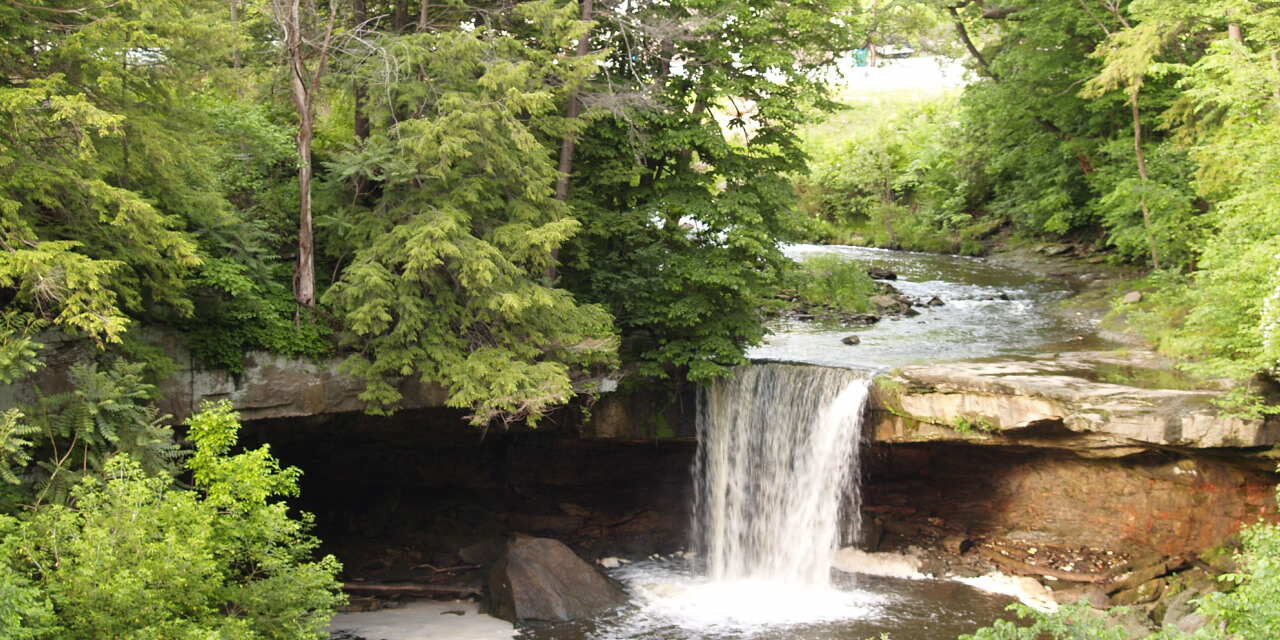 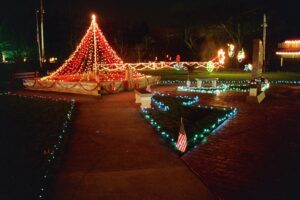 Cascade Park is a cherished legend; with its gorgeous landscape, waterfalls, wildflowers and boulders, you will be taken back by it’s beauty.  Enjoy hiking, fishing, bocce  and horseshoe courts, jungle gyms, dance hall and picnic pavilions. On hot summer days cool off with delicious homemade Italian Ice. An off-leash dog park is available for small, large and active breeds.

Don’t forget to stop by during Christmas time. Night becomes day with thousands of lights and displays for the entire family to enjoy.

Looking to rent – contact the City of New Castle for more information.

HISTORY– Originally known as Big Run Falls, the site was purchased in 1892 by Col. Levi Brinton. Around the turn of the century, power companies were finding it profitable to develop amusement parks. In 1897 Col. Brinton sold the property to New Castle Traction Co., which later became Pennsylvania Power Company.

After extensive landscaping and addition of numerous rides, the company held a contest to name the park. In deference to its cascading waterfall, it became known as Cascade Park. Cascade Park opened May 29, 1897. Cascade Park soon became a popular excursion point from much of western Pennsylvania and eastern Ohio. Special excursion trains would arrive in New Castle on East Washington Street and streetcars would carry passengers to the Park. Up to 7,200 people could be transported daily to the Park. The company built a theater, a baseball park, a roller coaster, and installed a merry-go-round. The company built the largest dance pavilion, which is still standing, in Pennsylvania in 1898, lighted with 45 arc lights. A lake for boating, swimming and skating, as well as a zoo and a picnic grove, were added the following year.

By 1925, the city claimed there were few cities the size and age of New Castle which could boast such a beautiful park. It was said to have the most beautiful natural scenery in western Pennsylvania and could accommodate up to 25,000 persons.

The midway boasted 17 rides, numerous eating places, concessions, boating and an open-air theater. Cascade Park also offered a 15-acre lake and a tourist camp with cooking and recreation houses in the picnic grove where tables could accommodate more than 2,000 campers. In the 1920’s, popcorn and peanut vender Billy Glenn, built the first swimming pool, bath house and fun house, the Gorge roller coaster, and set up a parking lot.

In 1934, Pennsylvania Power Company turned the park over to the City of New Castle to be used forever as a public recreation area. Park attendance declined in the second quarter of the century. Over the years, the Park has been known for the trees and flowers, notably the Floral Steps, that enhanced its natural beauty. Another jewel of the park was the lake, achieved by constructing a dam on Big Run. The lake provided swimming and boating in the summer and ice skating in the winter. Fishing in the lake was also a popular pastime. The lake ceased to exist after the dam cracked.

The park was rediscovered in the late 1970’s. The first to come to its aid was the Paws and Taws Square Dancers, who were looking for a wooden dance floor to call their own. Dismayed at the condition of the park pavilion, the dancers raised the funds in 1976 for repairs and renovations. The community followed the club’s lead. In 1980, a group of volunteers organized as the Cascade Park Development Committee. Its first project was a master plan to restore the neglected park, and a commitment from the City that all future development at the park must reflect the Victorian style of the earlier structures.

In that decade, the amusement rides were removed from the park, the Floral Steps were repaired, buildings improved, public restrooms constructed, and a playground installed. Local garden clubs adopted the Park and now plant and maintain flowers, trees and shrubs growing there. Events such as the annual “Back to the 50’s”  and Italian Festival, are now breathing new life into the park. These and other festivals during the year are again attracting people from near and far to one of New Castle’s most cherished legends.