Recently my grandfather went on an Honor Flight to Washington, D.C. to see the WWII memorials. The Honor Flight Network’s mission is to transport America’s Veterans to 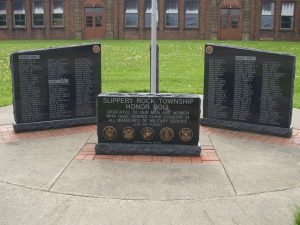 Washington, DC to visit those memorials dedicated to honor the service and sacrifices made by themselves and their friends. The entire organization is amazing and it’s no cost to the Veteran. Once arriving at the airport they have a welcoming committee greeting them as they exit the plane with a band playing, people thanking them for their service, handing them items of gratitude and more! It’s moving and deeply important to recognize the men and women who gave the ultimate sacrifice for our Country.  In Lawrence County we have over 10 war memorials. Each memorial has great meaning and pays homage to the men and women who left home in Lawrence County to fight for the Greatest Country on Earth.

The Honor Flight takes veterans to Washington D.C., but here the meaning behind each monument is deeply rooted in our community. Consider taking a tour and imagine yourself in these moments, you will be profoundly moved. Visit the memorials this Veteran’s Day and every day in Lawrence County. 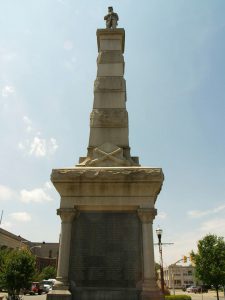 downtown to commemorate the soldiers who had died during the Civil War. A cannon was placed in the park and later a plaque with the Gettysburg address was placed by the monument. There are now stone monuments to the men who served in the Spanish-American War and World War I.

Battery B monument which sits on a hill along Route 108 just east of the village of Mount Jackson, was dedicated in June 1912. In 2017, the 9 miles between Mount Jackson and Enon Valley was recently renamed Battery B Memorial Highway, honoring Civil War veterans who traveled the road when they went to war.

On April 12, 1861, Confederate forces attacked the Union stronghold of Fort Sumter near 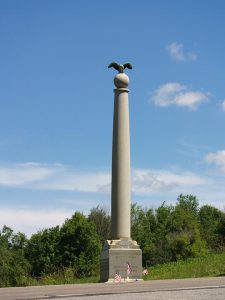 Charleston, South Carolina, and set off the American Civil War. In the wake of this incident a local artillery unit known as the Mount Jackson Guards was formed and headed up by Capt. Henry T. Danforth, a veteran of the Mexican War. Word was circulated throughout the township and neighboring areas and dozens of men signed up. On June 8, seventy-seven men assembled at the Methodist Church in Mount Jackson and went off by wagon to Enon Valley where they boarded a train headed to Camp Wright near Pittsburgh. This unit was later inducted into the U.S. Army as Battery B, the 1st Pennsylvania Light Artillery, Pennsylvania Reserve Volunteer Corps.

The Unit took part in twenty-seven engagements, including such famous battles as Gettysburg, Chancellorsville, Antietam, and Second Bull Run. Of the 332 men who eventually saw service with Battery B a total of twenty-one were killed and fifty-two were seriously wounded – an unusually high number of casualties for an artillery unit. The survivors of Battery B, or Cooper’s Battery as it was popularly referred to, were mustered out of service at Harrisburg on June 9, 1865, and returned home to Lawrence County.

Dedicated in 1945, across the street from Croton Pre-K is the impressive Croton Honor Roll. Back in 1918 Croton Pre-K was known as Croton School, and had one of the best bands in Western PA and one of the only elementary school bands in the county. They would see the men going off to war at the train stations. 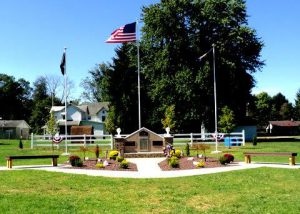 and Erie Street was made possible by volunteers, Walter and Eleanore Patton.

Off of West Washington Street in New Castle, West Side Monument sits. Located in the middle of the boulevard is an artillery cannon surrounded by American flags and stones etched with uplifting poems.

In the heart of Enon Valley is the Enon Valley War Memorial.  It is located on Route 551 (Main Street), just across from the Fire Hall on Cass Street. It was last updated in the early 1980s, and volunteers are presently raising money for those who served from then till the present time.

More monuments on your tour include Pulaski War Memorial is located off of Route 208, Union Township Memorial  located in front of the township building on 1910 Municipal Dr., New Castle, PA and memorials in New Bedford, Taylor Township and Mahoning Township.

Our Veterans are gone, but never forgotten. 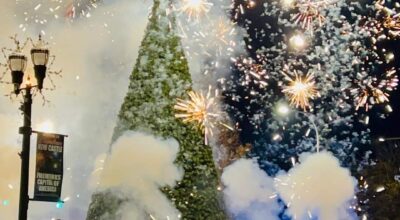 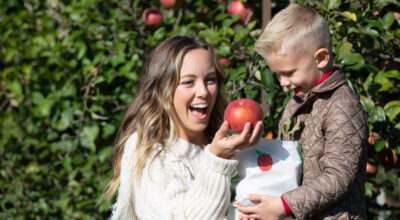