several years ago as grandparents and other family members of students would bring him into our office to take photos and gather information on our area to send back to the child. We LOVED the idea of children learning more about Lawrence County that we designed our own and named him Flat Larry, short for Lawrence. We often joke that Flat Larry is a cousin to Flat Stanley and he has traveled as far as Afghanistan with a local soldier. (see photo)

Flat Stanley is a 1964 children’s book written by Jeff Brown. Later, The Flat Stanley Project was started in 1995 by Dale Hubert, a third grade schoolteacher in London, Ontario, Canada. It is meant to facilitate letter-writing by schoolchildren to each other as they document where Flat Stanley has accompanied them. Our purpose of Flat Larry visiting an elementary school is twofold; it combines with the teaching of Flat Stanley already implemented in the classroom and it goes along with the TPA’s plan to educate our youth on the beauty of their county.

I have heard the saying “out of the mouths of babes” many times, over the years. It was the first saying that came to mind while visiting Ms. Jen D’Angelo’s class at Union Memorial Elementary. The children were very attentive and eager to ask or answer questions. I found myself beaming with pride as I gazed among these sixteen wonderful students and possible future leaders of our community. Parents of these children should be very proud of their children. With obvious parental guidance and that of Ms. D’Angelo, these children were eager to learn and know more. Special thanks go out to Union Memorial Elementary Principal, Linda O’Neill who has the insight to encourage meaningful learning experiences for all students. She along with staff member, Lori Jaworski-Connelly, helped coordinate the visit of Flat Larry to Ms. Jennifer D’Angelo 2nd grade class.

Ms. D’Angelo asked her students to write about one of their favorite places in Lawrence 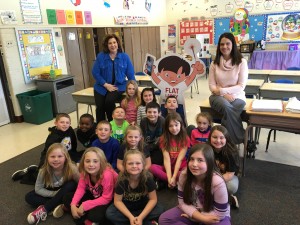 County. The children had many diverse subjects and mirrored what many of us adults love, as well. We all know how good the food is in Lawrence County and it would seem the children know this, too. They mentioned pizza from Pizza Joe’s and Augustine’s, two leading pizza manufacturers in Lawrence County. Forbush, Parkstown and the Iron Bridge were also mentioned as favorite places to eat. Let’s mix in some attractions such as Living Treasures Wild Animal Park, Irons Mill Farmstead, Back to the 50’s Weekend and then add Apple Castle, New Castle Playhouse, or YMCA, Stavich Bicycle Trail, and Scotland Meadows Park. The variety doesn’t end there. Other favorites included Westminster College, Jameson Hospital, Amish Countryside and one of our own fireworks companies, Pyrotecnico.

Life is so beautiful in Lawrence County even our children see it. As adults we don’t always realize how powerful the spoken word is and we can often be our own worst enemy. I charge everyone reading this to try and speak more positively about where you live and if you have a problem with something, then get involved and see how you can make a difference. As John F. Kennedy once said “Ask not what your country can do for you but what you can do for your country”. Let’s break that down to county, city, township or borough. Each of us CAN make a difference.

Celebrity Series for Kids: Miss Nelson Has a Field Day